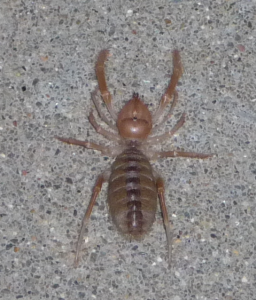 Some info on spiders

As spring is approaching, and the bug season begins, The editors of Your Home Quarterly, had a chance recently to sit down with Steve Thompson*, from ALL-PRO Pest Control, to get a brief insight into the world of Spiders, and to get to the bottom of some rumors and myths about these 8 legged creatures.

YHQ: Ok Steve, what’s the deal on these spiders everyone calls Vinegaroons? I understand if they bite, among other things, everything will taste like vinegar.

Thompson: False. First of all, we don’t have Vinergaroons here in the desert, or anywhere else in California. The animal most people are seeing is actually the Solpudgid, or Sun Spider. These are actually beneficial to have around. They eat bugs of all types, and spiders too, Including the Black Widow Spider. In fact, they really aren’t Spiders at all. By definition, Spiders must have fangs, venom, and web-making spinnerettes, the Solpudgid has none of these, doesn’t bite, and is completely harmless… Unless you’re a bug!

YHQ: So, speaking of the Black Widow, How dangerous are they really, and can you give me a short lesson on their biology?

Thompson: Sure. Although I’m sure most of us have seen these, the Black Widow is usually shiny black in color, averages about the size of a nickel, and has a distinct red hourglass on her belly. Some of the immature spiders though, may actually have streaks of white on the back of her abdomen, even a lightning bolt pattern. As the spider ages, the white turns red and moves to her underside. The Spider usually hangs up-side down in her web, waiting for food (bugs) to get caught in her web. She likes to be out at night. The female can live up to 3 years, the male only 1 to 3 months. Oh, and by the way, she doesn’t always eat the male. If he’s fast enough that is, to escape.
Although the Black Widow Spider is considered the most venomous spider in North America, (Ounce per ounce, the venom is 15 times stronger than that of a rattlesnake), the bite of the Black widow is rarely fatal. Pain is usually quick, a pin prick feeling, then nausea, sweating, abdominal or neck pain. The bite may result in muscle aches or even paralysis of the diaphragm- which can make breathing difficult. Symptoms nay last several days. I would consider the bite a medical emergency, especially for the very young or aged. Time for a trip to the E. R.

YHQ: The truth, please, about the Brown Recluse Spider.

Thompson: This one gets a little complicated. The Brown Recluse that everyone fears (Loxosceles reclusa) Is not native to this area, or to Southern California in general. There is a “cousin” to this spider, called the Desert Recluse (Loxosceles Deserta) which might be occasionally found out in the desert, in the sand washes for example. In my 35 years of being in the pest control industry, I have never seen a Brown recluse in the Wild. I have seen only 1, and that was at Ft. Irwin, in a soldiers quarters. He had recently moved in from Louisiana, where the spider is abundant. I think the spider hitch-hiked here inside the soldier’s belongings!
Now, I know that most everyone knows of someone who has been bitten by a recluse, but we are discovering that most of these bites are actually Miss-diagnosed! Some staff infections will manifest with the same ulcerating wound (necrosis), so I can understand the confusion. But no, I don’t consider the Brown recluse Spider to be the foe most people make it out to be.

YHQ: Great info, Steve, I’m sure we could go on, but let’s get to the bottom line: when I see Spiders, do I need to hire an exterminator?

Thompson: We have a lot of regular customers who have hired us to do Spider control, but the first thing I always tell them is that pesticide treatment alone will probably not control the spiders. One of the challenges is the fact that they can reproduce very quickly. A black widow for example, can lay up to 900 eggs at a time! We practice this industry what is called integrated pest management. That’s where the customer and the pest control professional work together by keeping debris around the home to a minimum, keeping the spider webs down, making sure that water leaks are repaired, firewood is stored away from the home, and bushes/trees trimmed. Even something as simple as shutting off the porch light can detract spiders. Another place where a professional pest controller might help would be in eliminating the food that attracts the spiders- that being Insects. What I say about pests and house guests is this: “If you don’t want them, don’t feed them”. I suggest that Spider control starts early in the season, even before you start seeing them.

*Steve Thompson, of All-Pro Pest Control, has been licensed in the pest control industry, in California for over 35 years. His career has had him working or consulting on homes, businesses, cruise ships, airliners, trains, and even at some of our local military installations. He can be contacted at (760) 242-2344 or at: www.highdesertbestpestcontrol.com

Thanks to Your Home Quarterly for the interview

Have you ever had to deal with a serious pest control issue in your home, office, or business? Then you don’t need to be told how stressful it can be. Rats, mice, and other common pests are more than just irritating annoyances. They can badly damage your property, jeopardizing your investments and livelihood. Many pests also cause health issues and allergies to flair up. Problems with insects and rodents can end up putting you and your family at risk for a variety of serious conditions.

The key to avoiding the potential issues with these and other pests is to have your place protected by the best high desert pest control company. A good exterminator is more than just a solution to your existing pest problem. They’ll also possess the experience, knowledge, dedication, and know-how to prevent your issue from coming back in the future.

The Importance of the Right Experience

Many people will just open a yellow book or search for the first pest control company that comes up in a search engine. Some will actually bother to do their homework, but then wind up going with the cheapest guy out there only to find that they weren’t able to do the job as promised. The number one thing you should be looking for in a pest control partner is experience and All-Pro Pest control has been serving the High Desert since 1978 and prides itself in its knowledge of Desert Bugs and Pest.

Don’t settle for anyone that isn’t well-versed in all the possible issues a given pest problem might cause. Choose pest management partner that has years of solid experience backed by a good reputation and plenty of positive consumer feedback over the ones with the lowest prices or the flashiest sales tactics. It’s also important to make sure the Pest control partner possesses local knowledge of the High Desert’s weather conditions, common species of pests found in the area and extermination methods that work the best on local properties.

A Thorough Job Is a Job Done Right

Don’t be shy about asking us questions about the methods we use or our strategies in regards to a specific matter, especially if we are talking about a persistent problem that other extermination efforts haven’t been able to take care of. We offer a guarantee on our services that help make sure that your pest issues stay under control in the future.

All-Pro Pest Control is one of the High Desert’s area’s top pest management professional (PMP) for a good reason. We’ve been in the pest control industry for over 40 years and possess superior knowledge in regards the specific issues common in california and the high desert. Each and every one of our extermination professionals is experienced and knowledgeable according to high professional standards. We’re also completely bonded, qualified, and insured when it comes to being able to take control of your pest issues.

We start the pest control process by providing you with an initial pest treatment. If the problem isn’t taken care of, we return to your property for a follow-up inspection and to retreat any specific areas if necessary. We provide services that help you maintain control over pest into the future as well. Call us today for your inspection and experience the All-Pro Pest Control Difference.

They are a real pleasure to work with. They are on time which was important to me because I wanted to be there when they worked. Great staff.

The weed service is astounding. No need to hula hoe And they are gone for the season.

I live in the eagle ranch community in Victorville. For the past 2 years we’ve had bees in the stucco and wood archway crossing over Eagle Ranch Pkwy. I’m shocked no one has been stung yet. I seen the All-Pro truck parked in the dirt field by the arch and observed them treating the bees. A few days later they returned and actually busted out the stucco and removed the nest. I am so happy this has been taken care of. No more risk of stings. The man was courteous and explained what he was doing and why. He was even concerned for my safety, seemed knowledgeable and professional. I got his business card and will contact them when I need pests killed!

Steve is my pro pest

Steve is my pro pest control guy. He does a very good job and is very friendly and professional. I haven’t had a bug since he got rid of them for me.

Steve is our bug guy, he is very knowledgeable, ALWAYS ON TIME, AND VERY THOROUGH. WE HAVE BEEN CUSTOMERS FOR OVER 15 YEARS, AND RECOMMEND HIM ALWAYS

They are professional and do great job, THEY ARE ON TIME. I have NO issues with ants or bugs.

I think your company is very professional

Chuck is great and is very accommodating. Does the job right. No ants and its been 2 months! Great job,I  highly recommend him and his company.

Thanks Again Joe and Angela

I’ve been using All-Pro Pest Control for many years. Steve services my home and does a fantastic job while being a very interesting person…very competent and friendly. I have no insect problems and when I need weeds sprayed, Steve does a perfect job. I highly recommend all-pro.

Mr Thompson has an astounding

Mr. Thompson has an astounding work ethic. His knowledge of the field is beyond reproach. And yes his boating skills are second to none. All bugs and pestles scatter when he comes aboard. All kidding aside his guy Chuck is top notch!